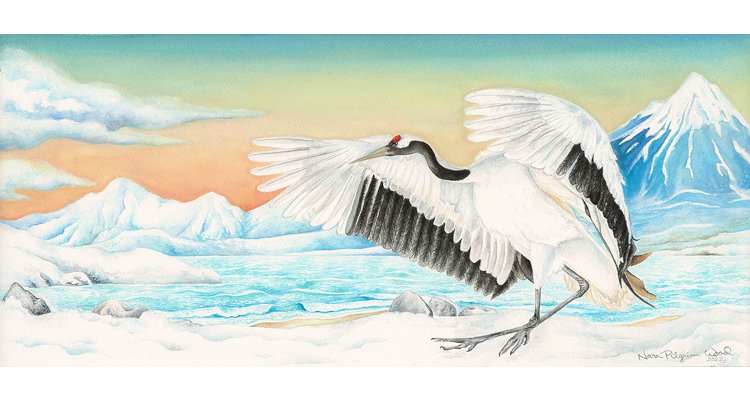 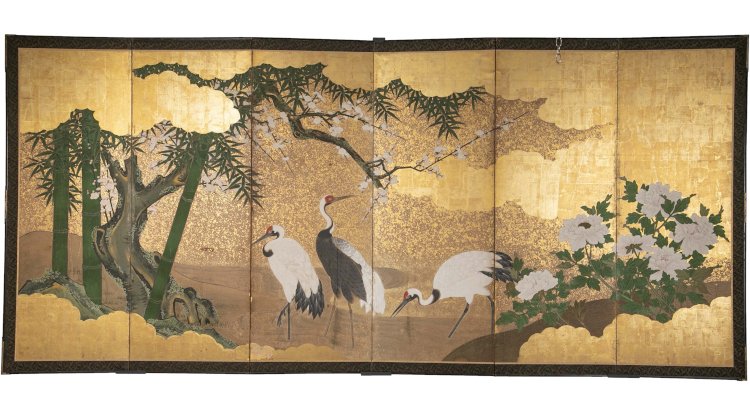 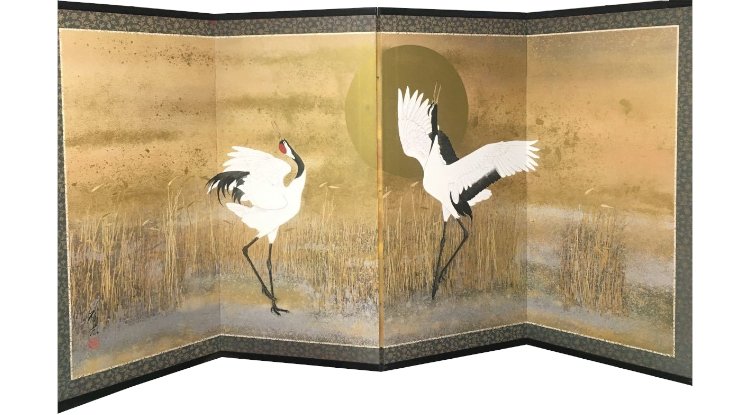 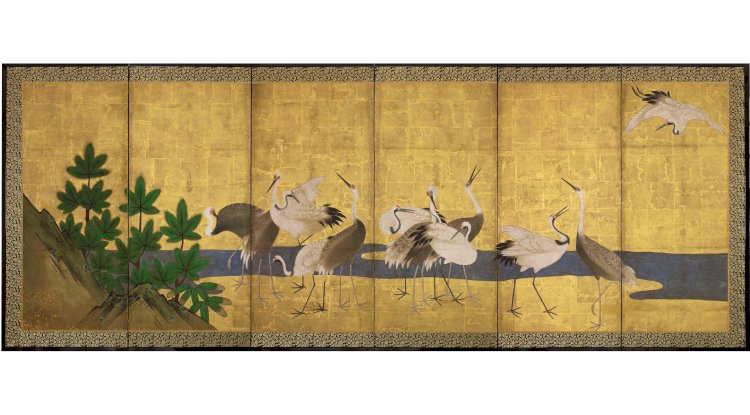 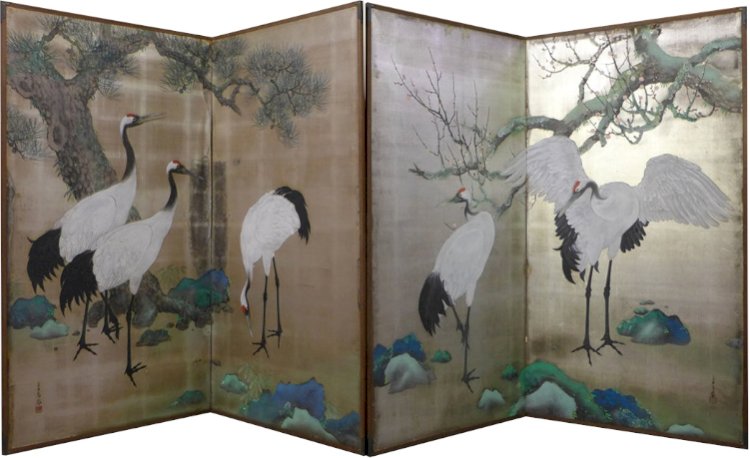 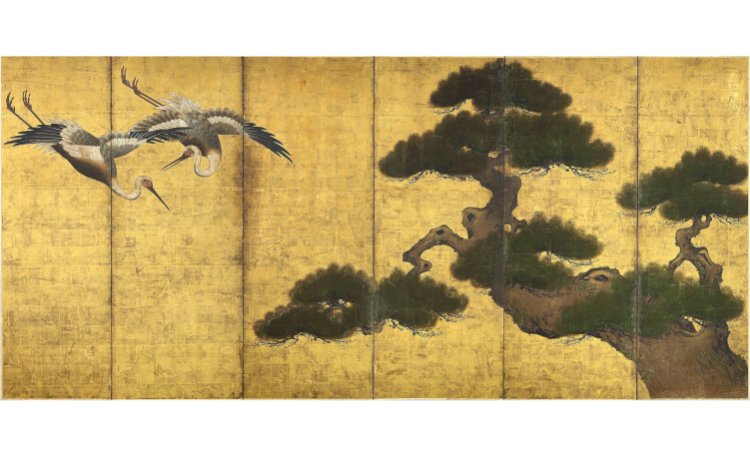 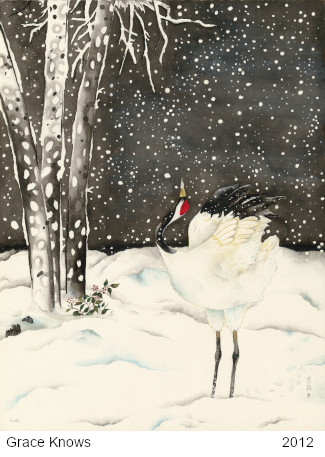 I wish I could show you a video that Jeff made a couple of years ago. I am unable to because it contains footage from a BBC documentary that was made to showcase the resurgence of the red-crowned crane on the island of Hokkaido, the northernmost of Japan’s four main islands. Interspersed among the clips from the BBC there are moments of me painting “Mindless Dancing” (one of the watercolors in my “Rising Sun” series). Ray Lynch’s music accompanies the beautiful imagery, but the stars of the show are the beautiful and exuberant cranes.

I have a friend whose name is Crane, and who possessed an exceptional baritone voice. He loved opera, and I was privileged to hear him sing many times. I wanted to give him a gift on his 80th birthday and thought to paint an image of a crane for him. I had seen red-crowned cranes depicted in lots of Japanese art, particularly in byōbu, or folding screens, but I knew nothing of them. So, I did what we all do; I Googled “birds of Japan”. There were many images and a number of

videos for me to peruse. After watching the BBC video I knew I had found the right subject. The video showed the five foot tall birds in full display with their heads tilted back, faces lifted to the sky, and calling their song to the heavens…just like my friend. I painted “Grace Snows” for Crane, a red-crowned crane singing to the all above in a wintery landscape.

The cranes of Hokkaido are a resident population, and eschew migration unlike their kin in China and Russia. Only a few years ago the crane population in Hokkaido had declined to a mere thirty birds. Their natural habitat has been reduced substantially by agricultural development. Their feeding grounds have been drastically diminished. Gratefully, a gathering of the farmers of Hokkaido, realizing that they were on the brink of losing these most magnificent birds from their lands and lives, took it upon themselves to support the resurgence of red-crowned cranes in Japan. According to the documentary Hokkaido is now home to over a thousand cranes. Shows what can happen when the “haves” take the welfare of the “have-nots” upon themselves. The cranes had no food, so the farmers fed them, every day.

I have an affinity for Japanese folding screens, or byōbu. The screens are painted on silk which are adhered to wooden panels. The panels are then joined together with leather or paper hinges to produce a multi-panel partition or room divider.
The way the Japanese painters used and played with perspective has always interested and attracted me. I love the way that the foreground and background elements mingle and interrelate. I love the use of gold leaf in the paintings. The metal adds a quality that cannot be achieved with paint. The richness of color of the gold and the reflectivity liven up the images on the screens. This was what I had in mind when I painted the 99th painting of 100 during the “Narathon”, which I titled “Gratitude”. This painting differed from “Grace Snows”. The composition and perspective of the new painting was founded in what I had observed and absorbed from viewing Japanese folding screens, and I used gold leaf to adorn the image.

I got inspired after painting “Gratitude”, and after completing the “Narathon” (a “100 in 100” event in which I made a painting every day for 100 days). I liked using the vertical format of the paintings because of the ability to create byōbu-like perspectives, as the screens are vertically-oriented, also. I used gold leaf to form clouds and tie elements of the paintings together as is done traditionally. Apparently, a number of other people were attracted to the Japanese style of painting as I got several commissions after posting “Gratitude”. “Mindless Dancing” and “Spring’s Invitation” are examples of the earlier compositions in the Rising Sun Series.

I painted “Renewal in the Beautiful Land” with the intention of showing the crane with more detail, bringing a single bird more into the foreground. I kept the byōbu-inspired elements, natural elements in a colorful, serene background. But the single crane is more emphasized. Then, I put the Rising Sun Series on pause for a couple of years, and went on to paint other birds and animals in colorful compositions. Many of my paintings of the last couple of years have maintained the 3 to 1 ratio in the Pure Land and Pure Water Series, but I turned many of the paintings to horizontal to create a wide expanse of landscape background while featuring a lion, whale, hawk, or another non-human.

A few months ago I returned to the Rising Sun to paint “Brake Dancing”. I have never seen a red-crowned crane in the feather, so, I have had to rely on images and videos that are available online in order to see them and learn about them. Fortunately for me, it seems that there are a lot of people who are as taken with red-crowned cranes as I am. There is a cornucopia of images and other materials devoted to the majestic birds. I found a photograph of a crane caught in the moment of returning to the earth from flight, its wings cupping the air, breaking his speed for a gentle touchdown. The gracefulness and control of the bird was captured in the moment, and so was I. These cranes are truly beautiful and wondrous creatures!

I wanted to show the detail of the crane, so I abandoned the vertical-orientation limit that I had assumed for the Rising Sun paintings, and turned the painting horizontal so that I could show the bird well in the foreground of the painting, giving it the spotlight that it deserves. I put a snowy landscape behind him with blue mountains in the distance. Particular attention was given to the water. I wanted it to reflect calm; a chilly, but windless morning.

I will be doing more paintings of red-crowned cranes. They are just such interesting and lively creatures!

If you would like to see more of red-crowned cranes I would recommend taking a look at the BBC documentary, Trying to Save the Red Crowned Cranes of Japan. That’s the one that I came upon that inspired me so, but BBC has a number of short videos featuring the cranes on YouTube. 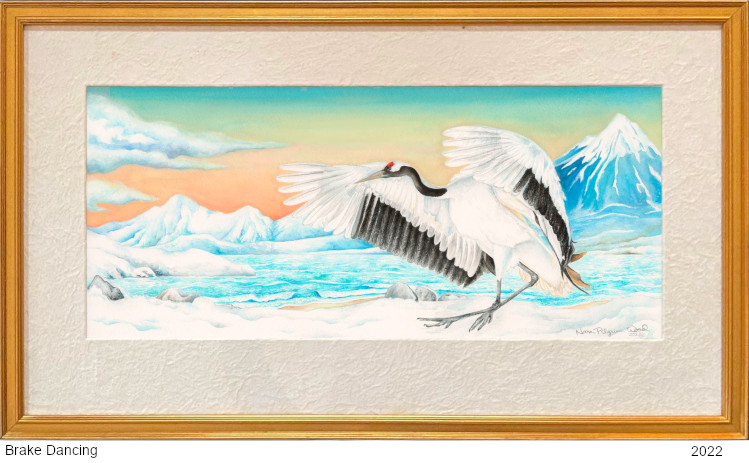 The Fire at Charlie's Place