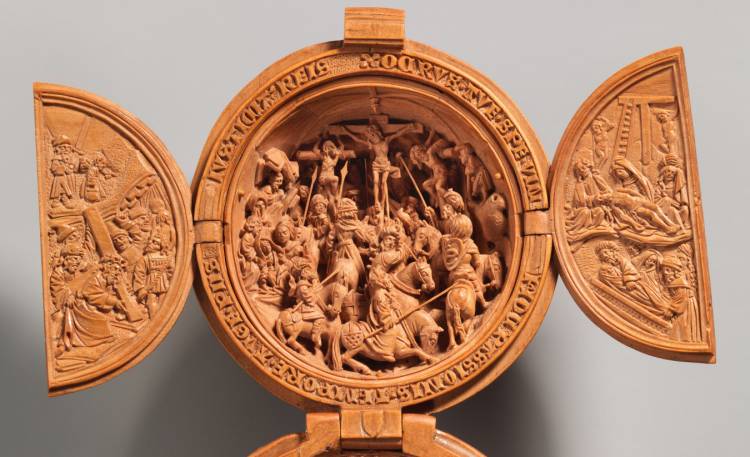 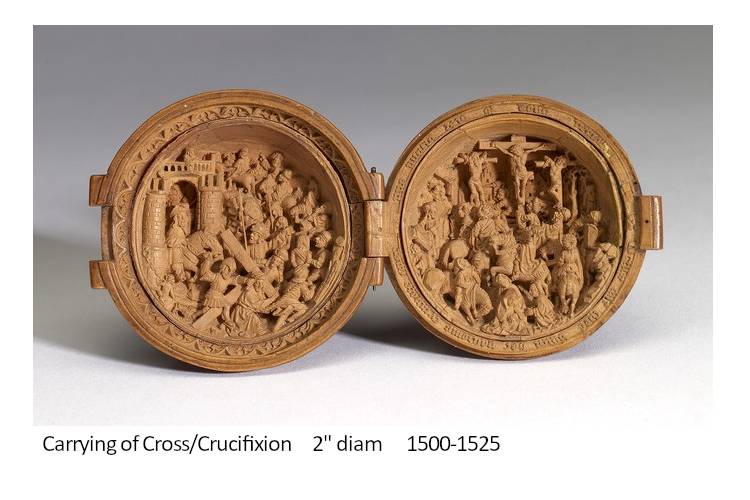 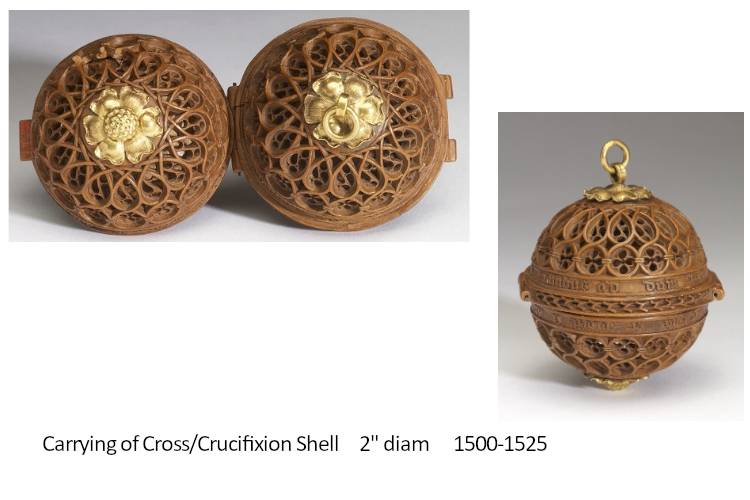 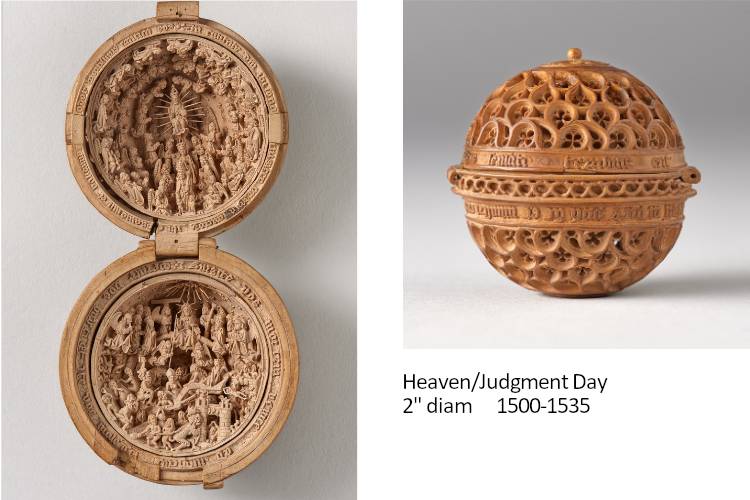 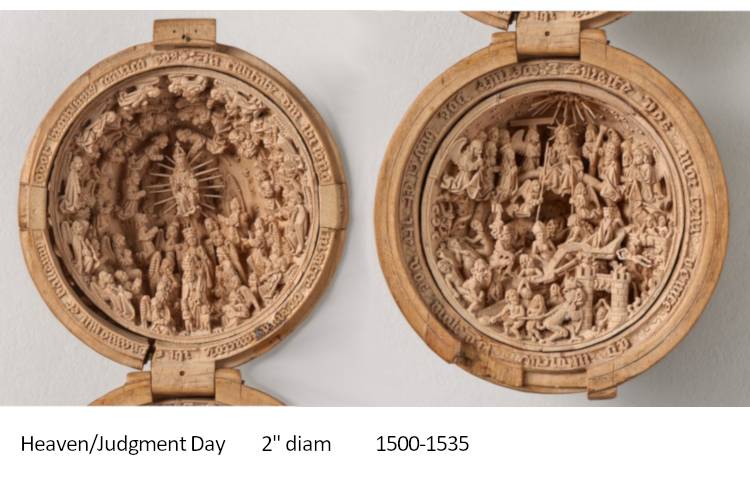 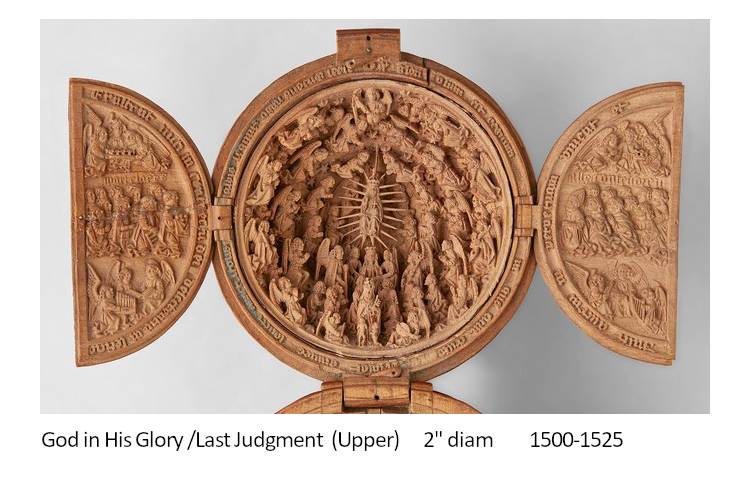 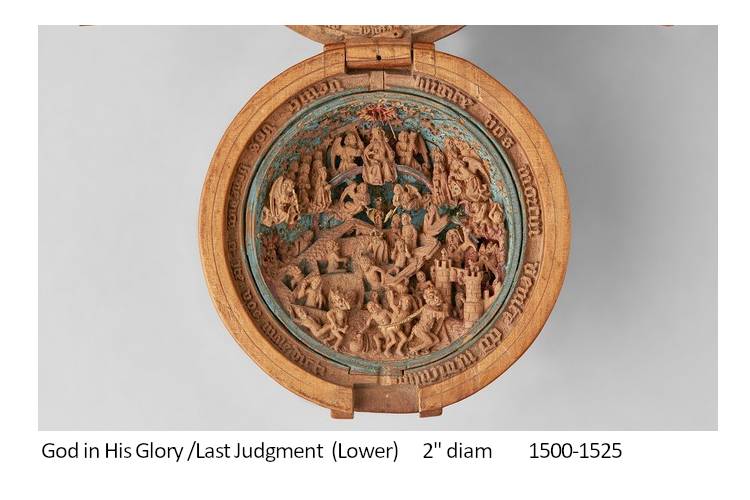 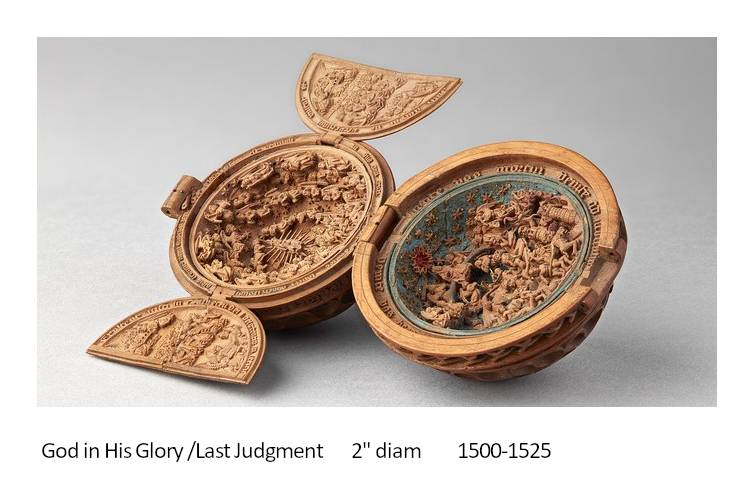 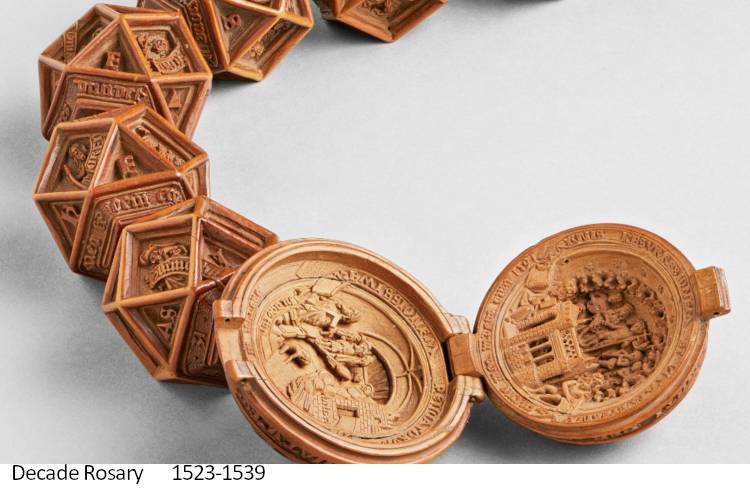 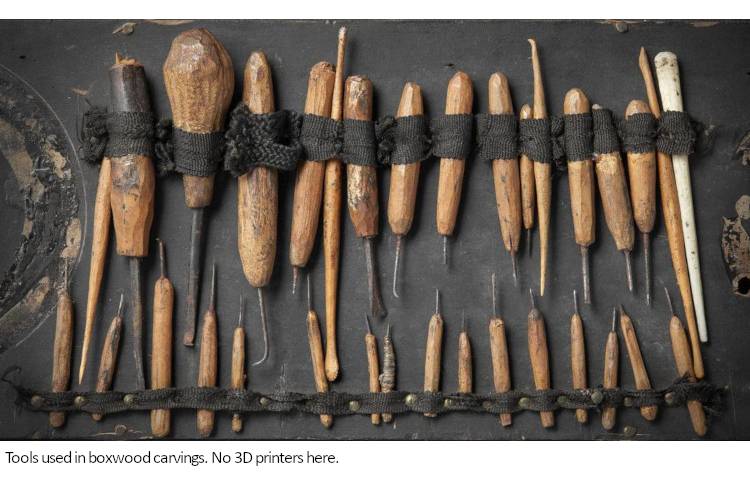 I’ll tell you about one of the most amazing things that I have ever seen. I was attending the 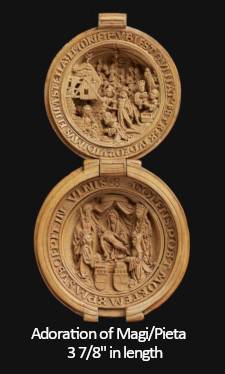 University of Kansas and working at the on-campus fine arts museum. During my tenure as a museum guard there was an exhibition of art of the latter Middle Ages in the main gallery. I was the single guard assigned to the gallery, and I spent most days entirely alone there. I guess there were not that many people interested in medieval art. I didn’t think I was, either. I was wrong.

Have you heard of prayer nuts? The history of them is obscure, though there is speculation that a Dutch man named Adam Dircksz created sixty of them in his studio. How he actually made them has been a mystery for over 500 years. Only recently, with the use of a micro-CT scanner have the secret techniques been revealed. But there is no technology that can reproduce them. (Check the slider at the top of this page to see a few examples.)

I spent many hours alone in that gallery, wandering 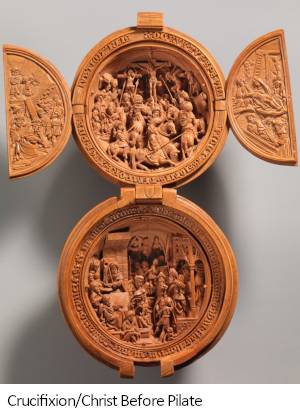 from painting to painting, examining each in detail.  But I returned over and over again to the single prayer nut that was on display in a glass case in the central part of the gallery. It was a 2 inch diameter sphere with extraordinarily complex carving on its outer surface in multiple depths, but it was what the sphere contained that really amazed me. The prayer nut had a wooden hinge carved into it which allowed the sphere to open horizontally revealing a tiny, extremely detailed carving depicting the crucifixion of Christ in one half of the bead. The other half detailed the carrying of the cross. The nut had a large magnifying lens over it so that the detail could be examined closely. But it was still tiny! I spent weeks gazing at that bead. I could not fathom how it had been accomplished. Not because the methods were unknown. It was simply inconceivable to me that a human being could carve an object from wood that was that small and fine, even in the present day.

The crucifixion half of the nut showed the spear that had been thrust into Jesus’ side. It was finer than a hair. The depth of view was immense with a throng of people stretching into the distance. The mass of people stretched back into the bead in astonishingly deep perspective. It gave the impression that there were thousands of people present. In the foregound you could actually see the emotions on the faces of the figures. The carving was so, so tiny that I simply couldn't wrap my head around it. As I said, they have figured out the techniques Dircksz used to create these masterpieces, but 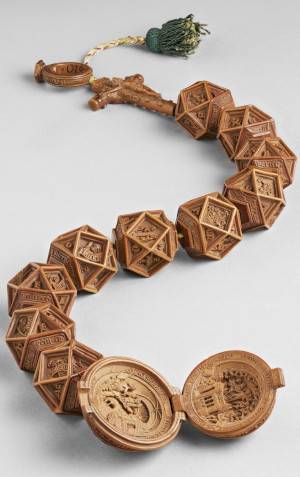 that technical mystery wasn’t why I was so struck by the bead. I had no hand experience back then, but I knew that they possessed only simple hand tools to make this thing, and how anyone could have that much command and finesse to coax this tiny object out of boxwood was beyond my understanding, no matter what techniques they used. It didn’t seem possible.

Attempts have been made to duplicate prayer nuts using current technologies; 3D printing, and advanced machine tools. No one, to my knowledge has made a serious attempt to carve one, and certainly not out of boxwood. Boxwood is super hard. It has to be in order to get the detail. But even with superior steel, tools, machinery, and technology no one has created a prayer nut close to approaching the quality of the originals, not in any material.

These objects come up for sale from time-to-time, and at $250,000 they are a steal! Why are they a bargain? Well, go to the most skilled woodworker/carver you can find. Ask him if he can duplicate the prayer bead that you admire the most. He’ll tell you he can’t do it. If someone says he can do it, he’s either underestimating the bead or overestimating his skills. Mark Paddison, who is a uniquely skilled woodworker, using advanced technologies has attempted to duplicate a prayer bead. He did a pretty good job with the shell using technology and machinery, but not nearly as refined as the originals and not in boxwood. He stated, however, that the only way that he could duplicate the inner carvings was with a 3D printer, and 3D printers aren’t refined enough to accomplish it. He didn’t know how he would hand carve the piece, but suggested that it could take four years or more to do it. I guarantee you that it would cost far more than $250,000, that is, if it could be done. (Check out this video of Paddison discussing the reproduction of prayer nuts.)

Now, consider any painting done by any master at any time. There are thousands of artists living today who could duplicate it precisely, at a fraction of the cost of the original. If you’re willing to go digital millions of artists could accomplish the copy. The highest price paid for an original painting is $450,300,000 for da Vinci’s Salvator Mundi. You can get a quality reproduction of it for a couple of hundred dollars. You can't get a boxwood prayer nut reproduced at all, at any price. So, you see, prayer nuts, at a quarter million, are a bargain.

If you'd like to see more prayer nuts and other boxwood carvings follow this link to The Boxwood Project. There you will find a gallery of photos from the exhibition “Small Wonders: Gothic Boxwood Miniatures”. You can also read about and see images of the scans that they did to unlock the prayer nut mysteries. 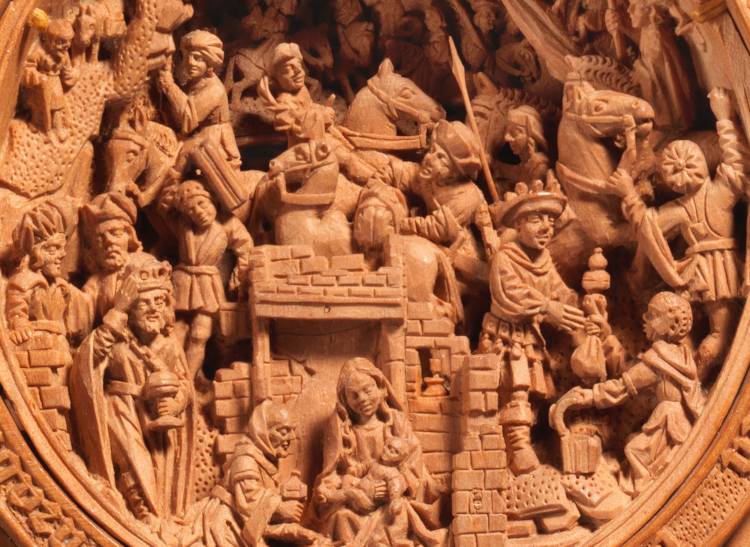