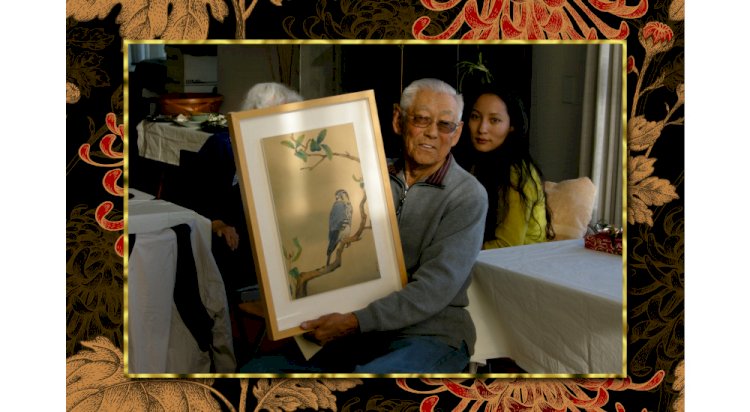 Looking back on the twists and turns of my life I find an invisible thread, one that connects me to my people from Japan, and to a cultural tradition in the arts. Let me tell you the story.
I grew up in California, Hawaii, and Fiji. As a young child most of my friends were white, and I didn’t notice any difference between us.  I didn’t have any concepts about race or skin color, and did not encounter racism.  I felt relaxed and at ease with my family, friends, and a large number of adults from many different countries.

When I first went to Kauai as a 5 year old, I was in heaven. I loved it there! I noticed that there were many people that looked just like me; Hawaiians, Asians, and people of mixed ancestry. I felt at home instantly, and embraced by the local people. Every time that I visit Kauai, I get that same good feeling, and that sense of inclusion by strangers.

When I moved to Fiji I was immediately taken with the Fijian people. They are a people of big heart with the most welcoming smiles and humor, and with a grounded quality of village life. I learned a lot from living with them, and I always felt an easy entrance into their homes and lives.

As a kid I loved the excitement of travel, and I loved getting to see different people and how they lived. I felt like a world explorer. I learned to live in a more primitive environment, closer to nature, without the amenities of running water, or always-on electricity. The Fijians showed me the special medicinal plants that grew wild, taught me how to climb coconut trees, how to use natural materials to weave into objects, and what creatures to be careful of in the lagoons. I played with the Fijian children, and learned the Fijian language from a girl not much older than I was.  I appreciated their culture, their respect for elders, their traditional ways, and their friendship.

I did not grow up rooted in my Japanese culture, in fact I knew very little about it. As I got older, I returned to California, and I visited my grandparents on their family farm in the San Joaquin Valley.  I sometimes heard snippets of adult conversations; brief comments mentioning something about “camp, but I didn’t pay much attention.

My connection to my heritage grew quite naturally as I reached my mid-teen years. It started with my decision to write a report on the internment of Japanese Americans during World War II. I was taking a summer English course; my first college class, and I really wanted to do well. I researched by reading books and historical documents at the library.  As I read and learned I couldn’t believe what had happened; the racism and animosity that was visited on the Japanese immigrants and birthright citizens. I felt anger, indignation, and a desire to find out more about this event. I called my grandfather to ask him if he would write a personal account of his time in the internment camp in Amache, Colorado. I was nervous asking him about his experiences, as it felt like one of those subjects that made people uncomfortable when it was brought up. But he responded positively; perhaps because I was his granddaughter, perhaps because enough time had passed that he could deal with looking back at his own history of that time. Whatever the reason was, he soon sent me a letter detailing what it was like for him and for others as they went through the trauma of evacuation to temporary camps and then on to permanent prison camps.

Before they were taken to the camps they lost much, many lost everything; land, homes, jobs. They had a very short time to handle all of their business, sell what they could, or find someone to keep their property and businesses going while they were gone. All treasures, antiques, and mementos from Japan were confiscated. Cameras were taken in case they were spies. They could each bring one bag with them.

My grandfather wrote about how they were treated, moving into old horse stables with manure still on the ground with no furniture, just a blanket for each person. He wrote of being treated as a prisoner, surrounded by walls, barbed wire fences, and armed guards. He also remembered how the people came together, helping each other meet their basic needs, and doing what they could to create culture and education amongst themselves. He wrote of the loyalty tests, and of the many Japanese-Americans that fought and died in the war, his two brothers among them.  He spoke of the people that stayed behind and worked for little pay as prisoners of the state. Sacrifices were made, hardships were endured, and it was a long time before any reparations or apologies were given. At the end of his letter he wrote:

“I am proud of how we survived. Our culture taught us how to withstand adversity, and we are people looking for opportunity. Yes, opportunity to be the best we can. Cultural background has a way to add character and made us strong-willed despite the odds” –Robert Ohki

I added his letter as an epilogue to my report, and this made the report personal, real, and meaningful. The best result of this endeavor was that something changed for my grandfather when he wrote his account. He began to speak at high schools in his area, telling his story to the new generation. He interviewed other survivors to record their stories, to make an accounting of those years of lost freedom and perseverance in the face of undeserved hardship. He was a lifelong farmer, a devoted husband, and a father of five. He was a pillar in his community, he brought people together. He was a hard worker, in his 90s he still brought in wheelbarrows full of wood for the fireplace and climbed up on the roof to check out a problem.

After the war Japanese-Americans tried to reintegrate, to blend into the culture here. They wanted to prove through their actions that they were loyal citizens, and upstanding members of the community. Names of the children became all-American names. The American culture was embraced. My mother’s generation did not speak much of the Japanese language. Still, after the war the close-knit and cooperative farming community of the Yamato Colony kept their culture alive while also blending into the culture of America.

This process of learning and discovery left me feeling more connected with my Japanese family and history. I was drawn to many of the traditional art forms of Japan. I had no outside influence suggesting these arts, or guiding me. My interest turned me to the study of ikebana (the Japanese art of flower arranging), and I found a gifted sensei to learn directly from. My grandmother was delighted! She gave me ikebana vases and I became the flower lady for all family events. I read and wrote haiku. My art training had been in the western styles and traditions. But my eyes and interests were now riveted on Japanese painters and woodblock artists. I copied the old masters, and in the process learned subtleties of composition, brushwork, and technique. As my own style developed I drew on this knowledge and sought to expand my own creative expression while still being very much influenced by these traditional forms.

Another form that is utterly attractive and compelling to me is bonsai. I have collected a number of beautiful specimens. Trees are a big thing for me, a lifelong love. I learned how to care for bonsai, and have been tending to my bonsai for over twenty years.

I also read Japanese literature, from The Tale of Genji to modern day fiction writers. Without a plan, I had spontaneously taken up these arts, and they became a part of my daily life.

One of the most rewarding art showings I have participated in was the celebration of the Yamato Colony’s Centennial, in 2004. The Yamato Colony is a Japanese farming community that was established in California’s San Joaquin Valley in 1904. Our family has been a part of the community since its inception. Many from the community pitched in to create this event. It was a team effort, each person contributing their specific talents. I showed a few of my paintings in a gallery with other artists originating from the colony. With a quiet swelling of the heart and feeling deep connections alive among the many generations walking through the gallery, I greeted my grandmother, Julia. She is a woman small in stature, but big in heart and quiet strength. She had come to see the art with some of her oldest friends. She was smiling and proud, showing her friends my work. I felt that I could not have given her a greater gift. They all told me how happy they were that my generation was keeping our artistic culture alive.

I was able to be a part of two art shows entitled “Giri: Giving Back—Going Forward-Celebrating Japanese Style, Tradition, and Culture”. They showcased the works of contemporary artists who reflected Japanese influence paired with historical materials from the Japanese American Citizens League. They displayed the arts and crafts created by the Japanese internees. “Giri” is a Japanese term which means an obligation to reciprocate favors and acts of kindness. These exhibits expressed thanks to the friends and neighbors of the Japanese who came to their aid at the time of their relocation. There were those who had compassion and lent themselves in the effort to safeguard the homes, farms, and businesses of those who were imprisoned. I was honored to participate in these events. It made a lasting impression on me, seeing my art hanging beside the art created by the Japanese artisans in the camps. Again, I felt the thread of connection as I looked at their beautiful handicrafts and the paintings depicting life in the camps.

From this vantage point, looking back over my seemingly accidental yet somehow purposeful path, I feel gratitude for the people that came before me. I feel grateful for the ones that worked for equality and demonstrated true heart.  I am inspired by the people that cooperated to build community and preserve culture. In this chaotic time in the world it is easy to be influenced by fear, discrimination, and divisiveness. That is not a path that I want to take. Let’s come together in unity, recognizing our interdependence. We must envision ourselves as a collective, the human family. We must learn to live and work together, and remember that we are connected to each other and to the natural world. I create my art with the intention of bringing love into life, of bringing happiness to others. May we each find our way to contribute to the changes that must be made, and to bring light and laughter, help and compassion to all.

This article was originally published on Indigo Hub

The Fire at Charlie's Place