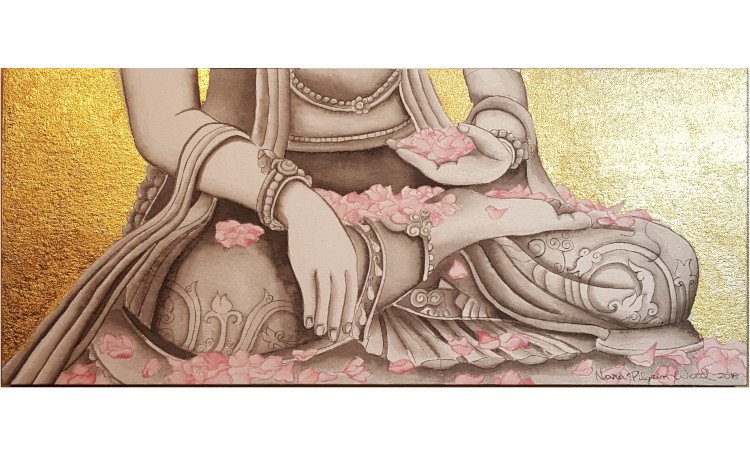 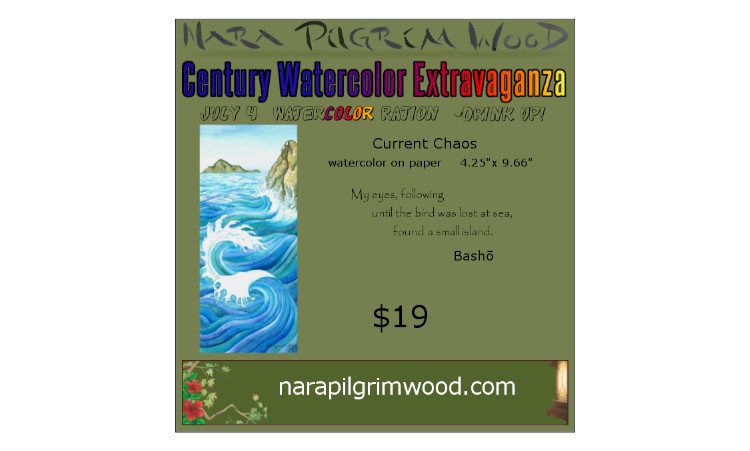 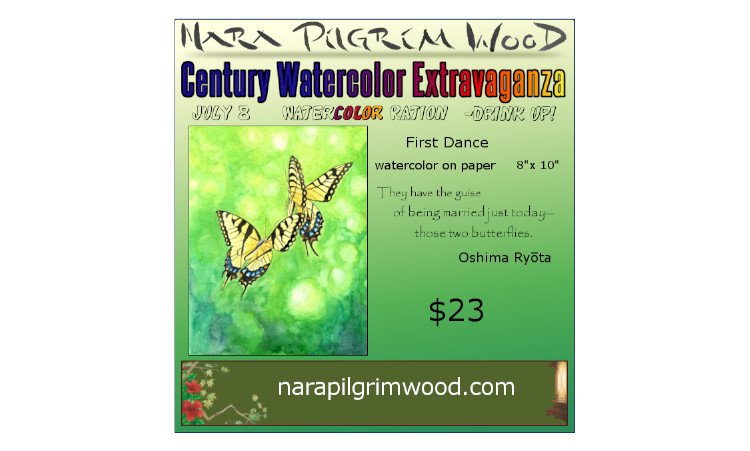 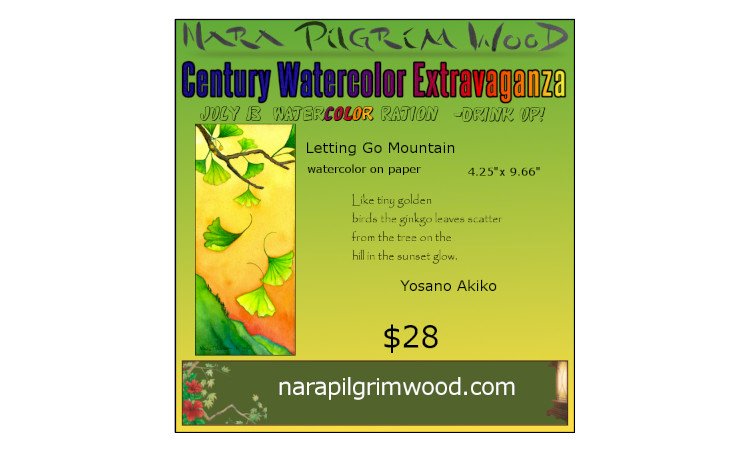 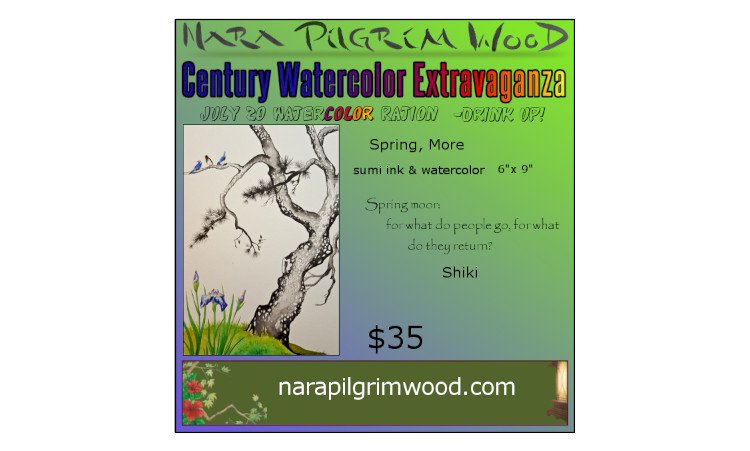 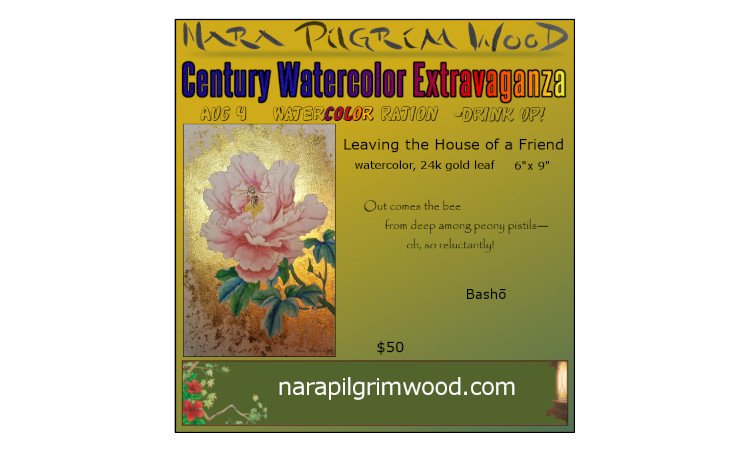 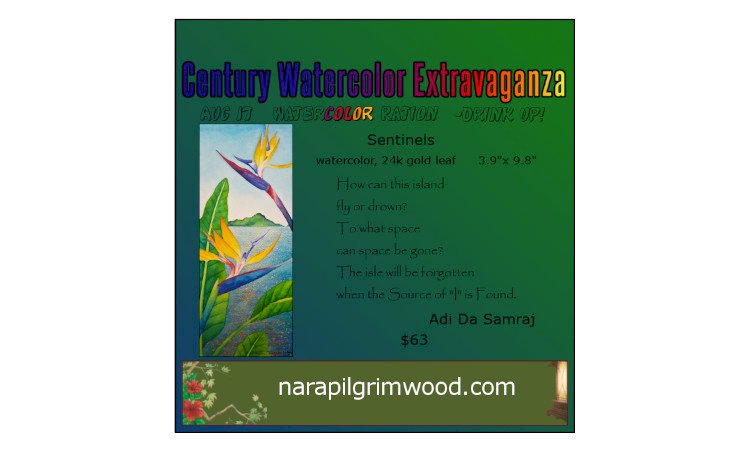 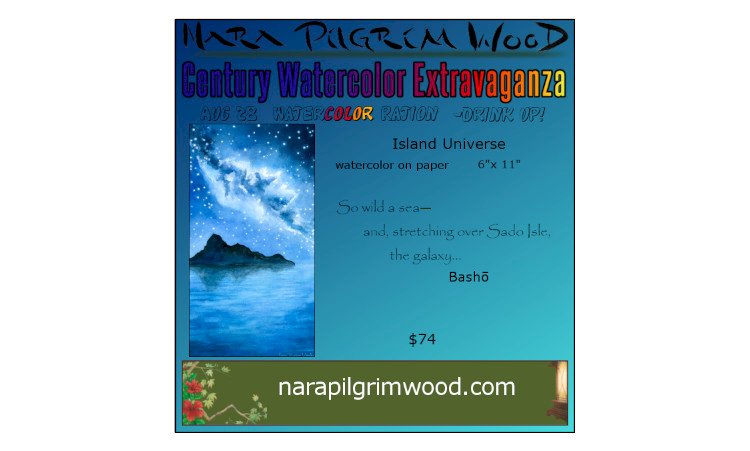 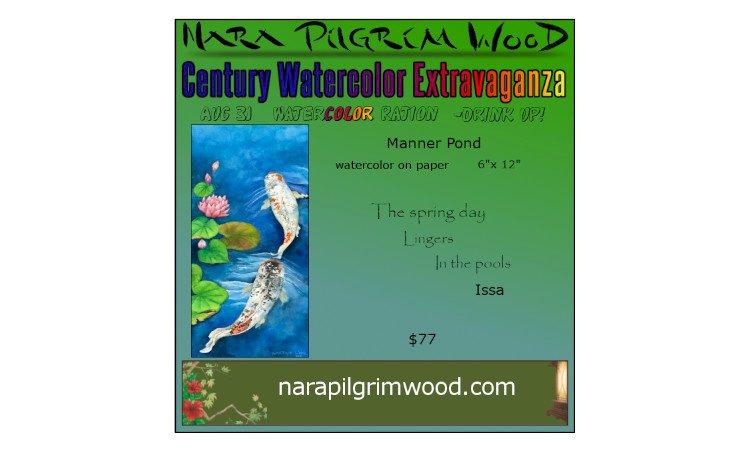 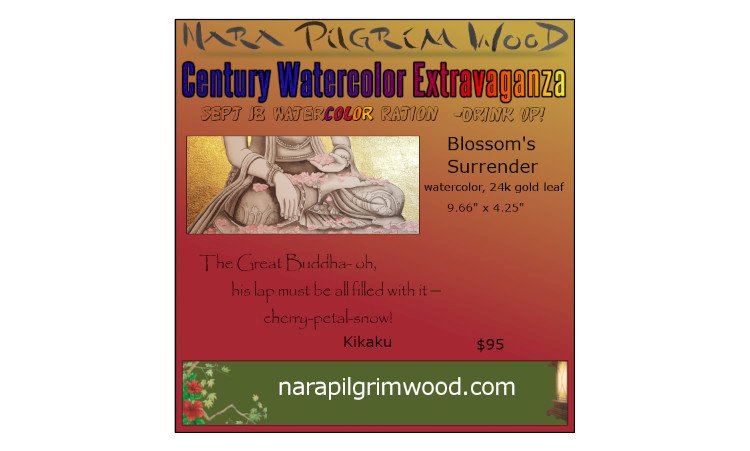 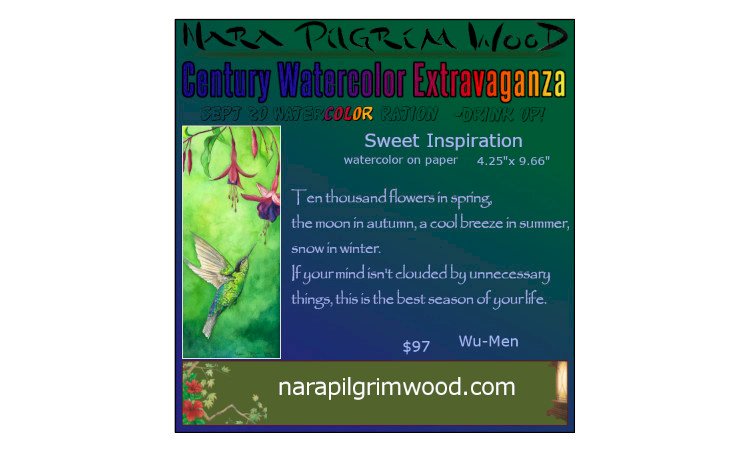 I have noticed that my blog article on the Century Watercolor Extravaganza receives a small but steady amount of views. I recall that I researched to find what others who had taken on a similar endeavor had done and experienced. It helped me to get a sense of what I wanted to do. I have not really communicated my experience during the process of the creation of the 100 paintings. In the hope that a synopsis of the entire event might be useful, especially for artists who are in the position that I was in when I was just thinking about it.

My Purposes in Doing the 100 Day Challenge

I had a few purposes in mind when I determined that I would make 100 paintings. I saw the need to improve and expand my internet and social media presence. Jeff and I had put in a lot of time

and effort in creating my website and this blog. There were many iterations of my website before we felt that it adequately represented both my art and me. You can’t be anonymous and expect to reach people in the maze that is the World Wide Web. I, like many artists, am not interested in creating stunts or making a caricature of myself, and certainly not a spectacle. These strategies for “wide notice” are successful for some, but truthfully, very few. More to the point, that is not me. I am not a “performer”. So, I needed to create another kind of event to “get some notice”, and I wanted my art to be the “performance".

I also, probably more than anything else felt the need to “move the energy”. My art wasn’t stagnating. I have painted consistently for most of my life. Still, sometimes you feel like you need a new direction, right? Everyone must feel that from time-to-time. I needed to expand, to initiate something new. I needed to create “incident”. Certainly I wanted to increase my audience and ultimately sales, but I also wanted to give my entire artistic process a “jolt”.

When I first conceived of doing the “100 day challenge” I envisioned doing small, quick paintings. That seemed to be what most painters were doing who had engaged the effort, and that seemed doable to me. When I first announced the

“Extravaganza” that is what I had in mind. However, not long before I began the 100 day process I realized that I needed to truly represent my art and my skills if I were to attract collectors.

The process of increasing my reach required that participants register for my newsletter, which is how I contacted those who signed up to receive the daily notice of the painting of the day. I started with a list of those who were already collectors and friends, a list of around 125 people. I also used Facebook and Instagram to

I approached the daily posts as an art form, also. Presentation is very important. Everything should be beautiful, everything attractive. It’s a principle that I try to bring into life. It makes a HUGE difference in the enjoyment of the day and everything else. So, we designed an email template which we updated each day with the painting of the day, title, date, price, and a haiku or other poem or verse. Most often we tried to use a poem that complemented and reflected the painting. Otherwise, we found a verse that seemed to fit the “feeling” of the painting. We made a “panel” that contained all of this, trying to make it so that it was easily viewed on all platforms, phone to desktop.

There are several examples of our daily postings and emails in the slider at the top of this article. You can see that we put time and effort in making our offerings as beautiful and compelling as we could manage. We didn’t want to fill our follower’s feeds and inboxes with “fluff and stuff”. I set the price of the first painting at $1.00 and increased the price $1.00 each day, so that the last painting was priced at $100.00.

I was trying to appeal to a worldwide audience, so I had to post the paintings at different times of day so that subscribers in Europe had a chance to make a response. Some folks were very quick to respond, the people who lived in close proximity to me. So, we found that it was necessary to use a random number to select the day’s winner. We announced the number in the post, “The ninth person to respond will win the painting.” Using these two methods we were able to draw in a wider audience. Paintings sold to collectors in many states in the U.S., the U.K., Ireland, The Netherlands, Australia, and New Zealand, Most of the paintings sold very quickly, especially in the earlier phase of the event when the prices were very low. Many went in less than a minute. Most went within ten or fifteen minutes. Nothing took more than a couple of hours, and they all sold.

The paintings were the most time-consuming and challenging component of the entire Century Watercolor Extravaganza  experience. All of the other work was just for support. Many of the paintings required five, or six, or more hours to complete. As I painted I thought of other possibilities, ideas for the following days. My imagination and vision expanded every day. I wanted variation in the paintings, using the exercise to show my interests and movements. I am primarily a watercolorist and most of the 100 paintings were watercolors. Still, I use a lot of sumi and gold leaf in my work, and I did a few colored pencil drawings for a little change of pace. So, there was diversity in what I painted, and that kept it interesting and lively for me.

During this time I also had commissions that I was painting, and I had to attend to “supplemental income” projects. I create “back of book” indexes for print media. I had a number of these projects during this time.

To complicate the summer we moved during the “Narathon” process. I had to really bear down and paint to prepare for it; get a few paintings done in advance while in the throes. When we moved it was into a fire zone. There was ash falling on us and thick smoke filled the air. We could not open windows, and the air conditioning needed service. It was 108F on some of those days, and sweat poured off of me as I painted.

It was very demanding, yes. But it was also delightful. I was the talk of the (small) town of Sebastopol, at least among friends and other collectors. I might run into a group at the Community Market and someone would comment, “There’s Nara Pilgrim Wood”. Previously I was just “Nara”. Then people would join in a conversation about the watercolors and the “Extravaganza”. So, it did serve to create “incident”, and it was a happy, bright occasion. I also responded to everyone who not only bought a painting, but those who had tried and failed. I did this every day, also via email and social media.

Was it all as successful as I hoped it would be? Is anything? But it was good. It was good to do, and yes, it was successful. It was a success on several fronts.

There are three series of paintings that I am currently working in, all of which grew out of paintings I did during the 100 day “Narathon”. The “Rising Sun” series was the first. Near the end of the Extravaganza I did a

The “Pure Land” series followed. All of the “Rising Sun” are vertically oriented “portrait” dimensions. That allows me to paint a “deep” painting…lots of distance and perspective. Or I can play with the foreground, bring a branch in close and still have a deep background. In “Pure Land” I am maintaining the same dimensions as “Rising Sun” paintings, but rotating them - “landscape” orientation. That affords me a panoramic view of a beautiful, “pure land”. I am including animal forms in these paintings, which I experimented with in the “Narathon”.

I have painted water constantly ever since I picked up a brush. There is water in most of the paintings that I make. This constant led to development of the most recent “Pure Water” series. I am letting proportions and dimensions vary in this series. Subjects are fluid also, and I intend to bring lots of sea life into this series.

It may seem counter-productive to sell your paintings for a few dollars, and it can be. But you have to approach this as an investment in “sweat-marketing”, and selling good work for nearly

nothing needs justification. You, as the artist, have to make it worth your while. That’s why Jeff and I decided that we would make the best work that we could in both the creation of paintings and in the presentation of the work. We considered, at length, everything that we could do to make it a full, exciting, and happy event…one that people would be excited to participate in and look forward to each day.

I could never have made it as full an incident if I had not had help. Jeff did all of the digital work, scanning, color-correcting, layout, poem research, daily website update, social media posts, and email announcements. If you can find someone who is creative and enthusiastically supportive of your work whom you can combine with you are miles ahead. It’s good to have someone in your corner even if they are not skilled, just someone to talk to about it all…a “touchstone”.

Remember to draw friends and family into your efforts. Ask them to help get the word out before you begin. I had entire families creating “cartels”. They would all try to get the painting, each submitting a reply to the daily email so that they had a greater chance of hitting the daily number. Groups of friends worked together. Some collectors asked their friends to bid even if they didn’t want the painting in order to increase their chances.

The Century Watercolor Extravaganza did create buzz, and I have developed new relationships and collectors in many parts of the country and the world. I wasn’t jettisoned into stardom, but that’s not my intention. My intention is to paint, and to sell of my work in order to support that intention. You have to know what your intentions are and keep focused on that.

Ikebana - The Living "Way of Flowers"

"It's In the Details" Treasure Hunt