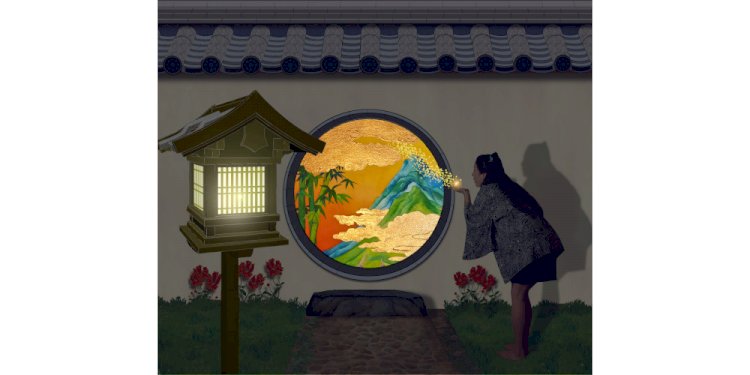 It’s Jeff. He’s the one who is doing all of “Funny and Fantastical” images. I don’t even know what he is up to most of the time.

For example, the Genmaicha Serenade image; I had no idea what he was doing. He just told me he had an idea, which is a common occurrence. He has lots of ideas. So, he asked me to put 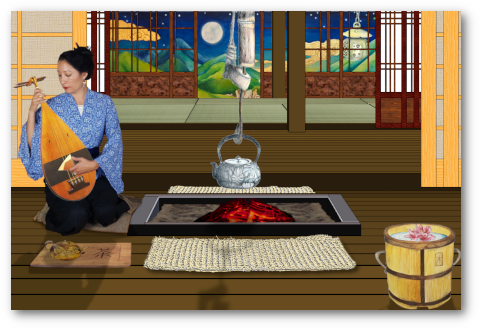 on a kimono, a dark-colored one. Then he asked me to sit in a Japanese “tea ceremony” pose facing him and the camera. He told me to raise my right hand about shoulder-height and hold my hand “loosely open”. Then he told me to hold my left hand at waist-height with my thumb up, hand also loosely open.

His direction went on, adjustment of hand and finger positions, turning of the head, looking down, looking up. He took so many photos of me in different positions I had no idea what Jeff was doing. I presumed that my image would be represented painting in some sort of bizarre and fantastical scene. But, no, I am shown playing a traditional Japanese instrument, the biwa, with the fingers of my right hand curled around the neck of the instrument, a plectrum held in my left hand striking a string.

After he finished with creating the illusion with my image he placed it into a digital drawing of a traditional Japanese house showing me seated at a tea hearth. I guess I am practicing my licks while waiting for the water to boil.

Jeff has a lot of fun surprising me with these images, and I delight in them, also. I love 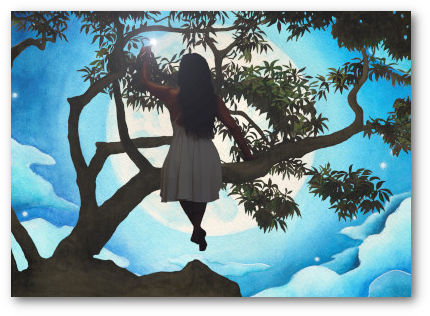 how he pulls elements from my paintings into the scenes. But his images have resulted in me having to do some “explaining” and “clarifying” with my friends. “No, I don’t play the biwa. That’s Jeff’s doing.” Or “No, I don’t paint on the floor with a giant brush.”

Some of the compositions have turned out just beautifully. Some collectors have even asked for giclee prints of a few of them, particularly Painting the Moon. Jeff combined two of my paintings, Portland Gardens and The Moon. Then he asked me to put on a summer dress and sit on a stool with my back to him, put my right hand out, palm down, as if to support myself. Then I held my left hand aloft, which was holding a paintbrush. The result is enchanting. I love the way my feet are shown dangling beneath the moon with the rocks below rising to greet my toes. The composition came together perfectly.

Some of the images are simply combinations of my paintings without any photographs or digital work, such as the combination of Open-Handed and Coral Sea, Coral Sky, those two paintings with the addition of the butterfly from Pilgrimage to Myoshin-ji. 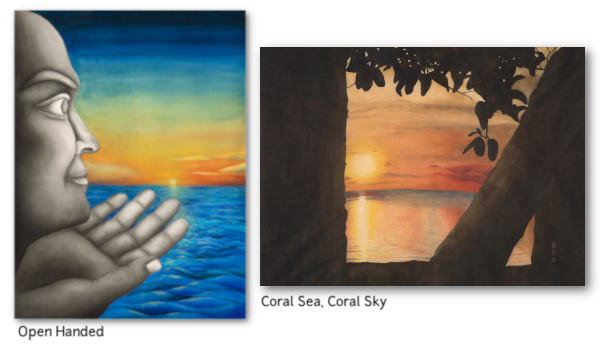 Jeff says that doing these images is a fun break from his jewelry and other work. He likes the fact that there are no materials costs and that digital work lets you experiment without any penalties. He likes working in a medium that allows you to undo a mistake with a keystroke. None of his other work is that forgiving. 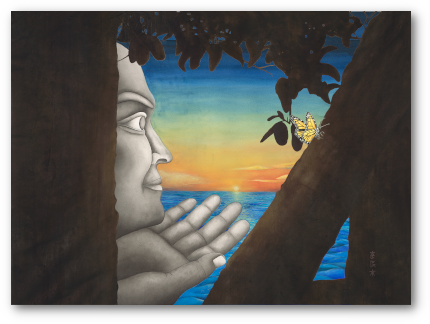 It amuses me, to be placed in fantastical scenes that stretch my presumed realities into enchanted worlds of possibility. Why assume limits? 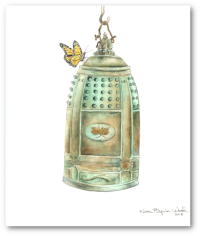